2009 - one of many trips through the city. There are twisty roads all around the neighborhoods of SF. Get out to the coast and wind down into Pacifica and out to Half Moon Bay - run up to 35 on Skyline and slip in and out of the redwoods. North over the Golden Gate you climb into the marin headlands and up to Mount Tam. My favorite quick run is over 17 to Santa Cruz - when it is crowded with summer traffic i jump onto Hwy 9 out of Saratoga and down through Boulder Creek and Felton. My first MotoGP bus ride into the track i sat and talked with people who came from all over the US and the world - they would borrow or rent bikes to ride over 17 and 9 and down 1 into Big Sur...... the world knows about our scenic roads and we live right here.

Ducati US is in Cupertino - the current president lives in Santa Cruz and commutes 17 to work on a MultiStrada. Living the dream.
Posted by jgomez at 10:35 PM 2 comments:

Trading Up to The VFR 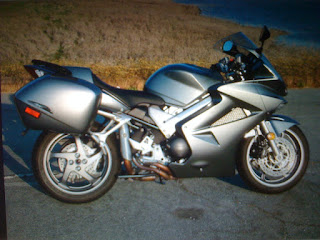 2008 - Honda VFR
First sat and examined at the 2007 International Motorcycle. I dreamed for almost a year. Only 200 cc more than the FZ6 - but a huge difference in engine design. Tried and true V4 with V-Tec - at 6500 RPM everything kicks in and the exhaust note changes.

MPG best was 52 - got it on a very slow start on my first long trip to San Diego. Thinking about safety first and getting used to the full weight of a loaded bike - i slowly inched my way down to Carmel. Checked the mileage and was impressed at what is possible with self control and almost 2 hours of boredom. Then i filled up for the stretch south thru Big Sur and into San Luis Obispo. On some stretches i tucked in and let loose the hounds. What gets your eyes wide is when a tourist crosses over the line on a turn as they crane to get a glimpse of the beach below. 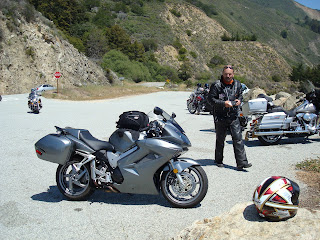 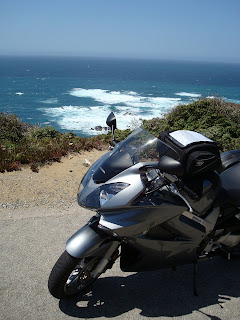 I would make this trip on Hwy 1 a year later with Chuck on his Ducati 1098. We rode to Ojai and took 33 through the mountains. This solo trip in 08 i wanted to just keep riding. 200 mile range on a full tank but, when it was all done i looked back and realized i did not stop enough and rest to enjoy the scenic views or just rest and take a picture or two. 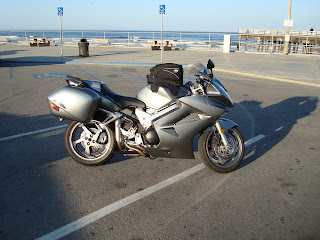 Saturday morning leaving early from Gary's house in SLO. Stop at Pismo Beach and then gas and breakfast in Santa Barbara at Sambos. This is where a lady waiting with her daughter named Alex went to walk her beagle named Joey. With a full stomach and warm weather ahead i turned in from the coast at Ventura and got a face shield full of bugs. Stopping for gas somewhere in LA two guys stop to ask about the bike. Is it a BMW? No i can't afford one. Where you going? 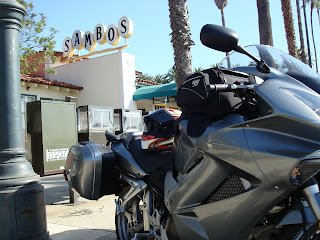 I lane split in some of the heaviest traffic i have ever been in north of San Diego. Over shoot my exit and end up in National City...... turn around and head north back to San Marcos. Barry, Naila and the boys gave me a great weekend visit and we saw the Red Bull Air Races. On a cloudy monday morning i took the 405 up to 101 and into Montecito. Ate lunch at Peabodys and then over 154 past Lake Cachuma for a nite at casa de Gibson. Then north on 1 home. 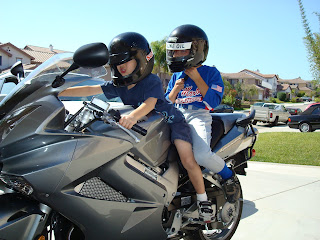 I stopped in Pacific Grove for a Red Bull and while sitting on a bench at Lovers Point a camera crew was shooting a trio of models. I was sitting there minding my own business and one of the ladies decides to change her wardrobe. I look around thinking this is candid camera. Then i realize i have the power of invisibility. I smile as she goes topless and slips into a new shirt. Then i look over at my bike and Pacific Groves man in blue is looking over at me from his patrol car. My cloaking device is failing. Time to get on the road. 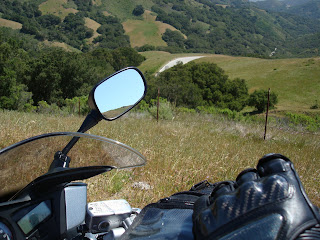 i forgot to mention there is a twisty two lane road, Prefumo Canyon Road, that rises out of Los Osos Valley and over to See Canyon. Great views. Quiet up there - suspicious cows will chew with eyes on your every move.
Posted by jgomez at 11:12 PM 2 comments: 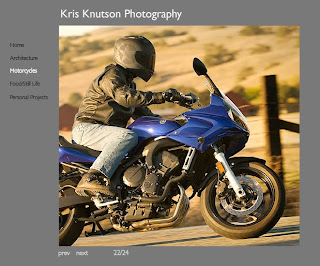 Lets take a trip down memory lane. Light half naked Yamaha built around 600cc of high rev fun. It had a quick engine and under tail exhaust. One night in Santa Cruz a 3 inch lip of asphalt caught my tire and sent me and the bike down on our left side. Usually within 6 months of purchase most motorcyclists have an accident. I got away without being run over and only minor injuries. The bike had heavy cosmetic damage but, was not totaled. My insurance skyrocketed. 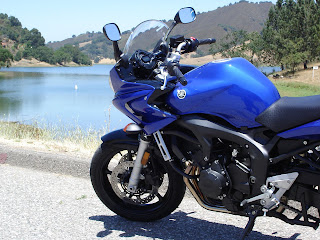 The Yamaha took me south to SLO via Hwy 1. Went to Laguna Seca for the MotoGP. Got one speeding ticket on 280. Got pulled over twice before and let go with warnings. You would think a little 600 is only a step above a scooter. But, it had the engine from the supersport and easily topped 100. Though it took a couple seconds longer to get there. The repairs brought some upgrades. LED brake light, rear fender eliminator, mini turn signals, steel braided brake lines. 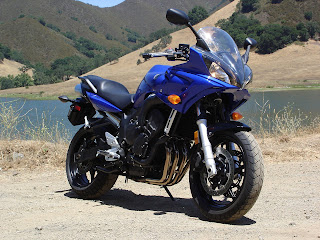 Changing the oil on this bike is really easy. Compared to the current 800 VFR i ride today.
The FZ6 got me 20,ooo miles in two years. Taught me alot about riding and was forgiving on early mistakes. This is the most fun around town - a very light and agile bike with a standard upright position. But, everything had a high rev buzz at long drawn out highway runs. 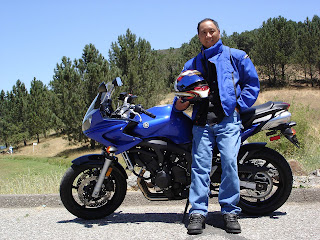 That is why i decided to trade up to the Honda VFR in 2008. Smoother running and hard saddlebags for the long run. I wish i could have kept this FZ6 - no hassle quick little bike. 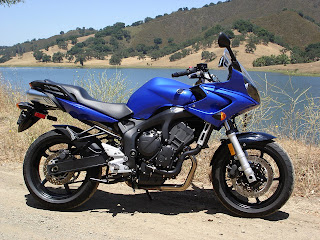 These shots were early on taken at Uvas near Morgan Hill. The following are the changes made to the bike prior to trading it in for the VFR. 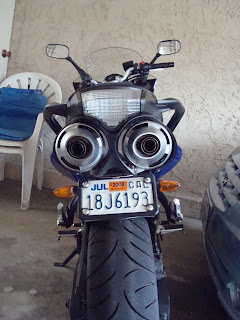 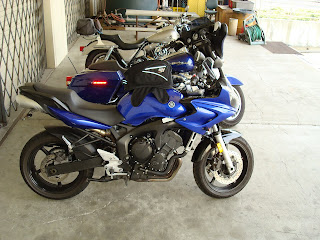 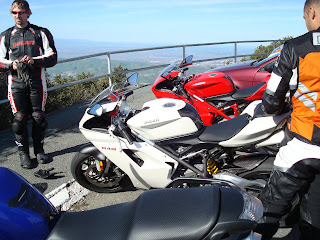 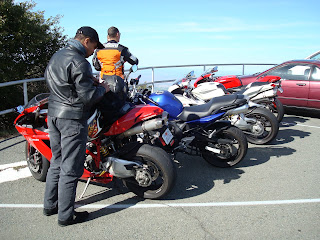