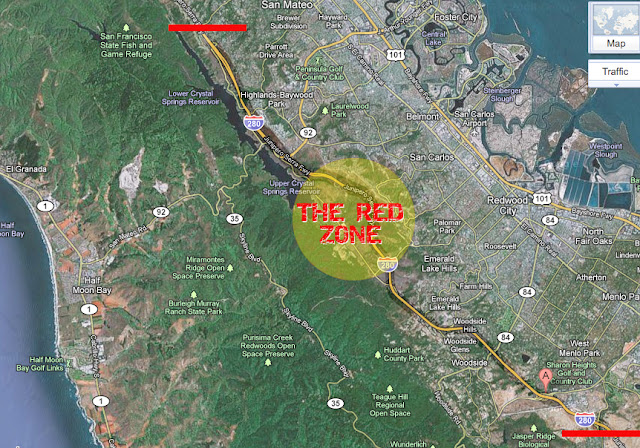 There is a stretch of 280 north that climbs out of Palo Alto - starting at Sand Hill Road and climbs north to the junction with highway 92. Long sweeping curves of four lane interstate. Picturesque landscape and you are surrounded by fast company. Drivers up there have fast cars and they do not care to travel on the more fuel economic straight and crowded 101.

I take my time going through this section of 280. Back in 2006 on my FZ6 Yamaha i was pulled over with the Toyota i was following. Guilty - 85mph. We both got tickets and the CHP was a young guy that informed me that he knows that on a bike it is easy to get above 80 mph; safely. He probably would let me go if I would have been closer to 75. So, after traffic school i made a mental note of this area. Take it down a notch and take a slower lane. Let the cowboys run up or down the hill.

Today, 2pm I was returning from the city and so were a number of people. Southbound as you approach 92 CHP will sometimes sit with a radar gun under one of the 92 ramps. I will usually ride one of the two middle lanes. No CHP  today at 92; just lots of traffic going south into San Jose. Some drivers feel there is safety traveling in packs three abreast just like what they see in NASCAR. Do not allow them into your safety bubble. Go around when safe to do so. Do not sit on their rear bumper trying to intimidate them into getting out of the way. They do not use mirrors or turn their heads to check the lane they are moving into. Does it seem that anyone who would run door to door, side by side or tea party style with another car has issues? Either they are oblivious to what can happen or they want the other guy to lift - back off - this is my road and i say back off on my highway. Passive aggressive or just aggressive aggressive.

I do not like to pass on the right - very dangerous - but sometimes the tea party crowd likes to hold hands as they run down the hill. I will wait a bit until they get staggered a bit just to make the odds of one or two cars getting wild and wiping us all out, a lower number. There must have been 3 - 4 of these small packs. I get around and then get ahead and then back to a 75 mph range.

Then on my left in the fast lane a brand new black 5 series BMW shoots past me. As he does this we pass a CHP on the Sand Hill shoulder - he was getting back in his cruiser - must have had radar out and the engine running. It all looked like one smooth motion - we all knew he was after the BMW - so we gave him room to merge in and sweep past us all to the fast lane and then... "GOT HEEM!" The beemer saw the CHP  - but, too late and tried to weasel back into the pack.

Why does that make you smile or laugh or fist bump? Is it because so many times they shoot down the road and there are no CHP around? Well, if you get the CHP at your window chances are you cross the line. Happy trails and be careful out there.

Run up Hwy 9 about 10am - traffic light for a holiday. Weather started cloudy and marine layer burned off by 9:30. North on 35 skyline to Alices to meet Chuck for breakfast. We came down the mountain to Hwy 1 then south to Davenport just 11 miles north of Santa Cruz. Then up Bonny Doon road into the Santa Cruz mountains - never took that road before - i usually go up Western Dr to UCSC and then up Empire Grade then down into Felton. This may be my new favorite - clean new asphalt - smooth sweeping curves. 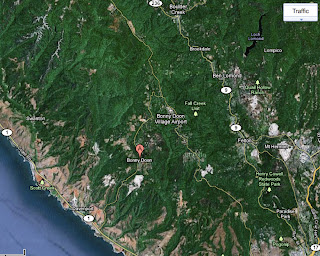 Connects to the northern section of Empire Grade and you climb north and then down into Boulder Creek at Hwy 9. Red Bull stop and then we decided to drop into Santa Cruz for lunch. 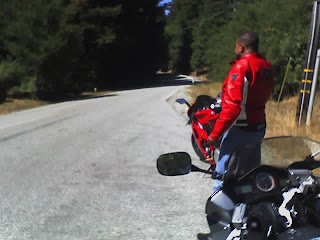 Stopped at my friend Ed's Wing Stop near the old neighborhood. Like salmon returning to where you used to live. Almar Ave. - Garfield Park Gang - good times. Always good to be in the old town.

Then a run up 17 with the beach traffic and into San Jose. Split some lanes in Los Gatos. Chuck splits off at 85 for the city and i went home after a quick stop on Stevens Creek Blvd for a battery. Nobody got hurt and no tickets and great roads and weather and what more could you ask for?