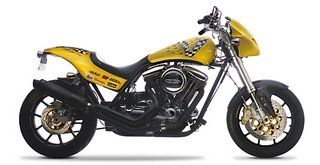 Summer of 2005
Started checking bikes out at lunch for short 1 hour rides in the hills around Morgan Hill. Sportsters, Road Kings, custom Harley's, company bikes with new equipment bolted on for testing. My favorite has to be the "V". Designed by John Reed, it has a 110 cubic inch v twin RevTech engine, 6 speed RevTech transmission sitting in a Santee frame, Italian wheels, forks and Brembo disc brakes. Pulled in for gas one day and this guy walks over and looks over the bike. He first asks "what the heck is that?" Then he asks "what kind of gas mileage do you get?" I say "if you are real easy on the throttle you might get around 25 miles to the gallon." The guy steps back and says "what good is that?" ...so i explain; It's not an economical scooter, it's a hot rod show bike. The D&D exhaust is loud - so, loud sometimes when you rev that motor in stop and go traffic in the city it sets off some car alarms. I've been lucky so far, no tickets. I also wear ear plugs. 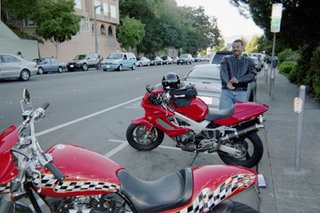 this was the first trip over the Golden Gate on the V. Took the Red V - we stoped by SBC park so Chuck could drop off some Giants tickets he sold on line. Gased up and we were off to see the IRL cars qualify at Sears Pt. We got there and we were late so we turned around and went into Sauselito for dinner. Chuck led me thru a bunch of 2 lane twisty bits and then it got dark. Heading home on 280 after dark is a real fun rush. You tear away from traffic and you try to see beyond your lights. The mirrors on the bike are almost useless - but, at night you get a better feeling about what is around you from how bright their lights are around you. 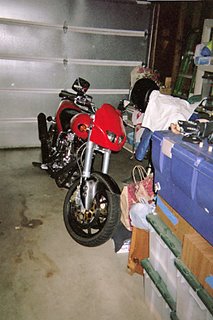 Get the bike in the garage and pull the gloves, helmet and jacket off. Wipe off any crud that happen to get in the way of the bike and just look at it. I like the paint. And the black pipes crackle as they cool off. That was fun. 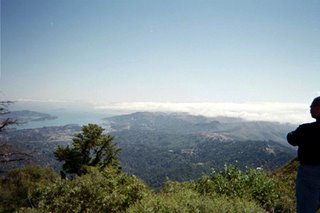 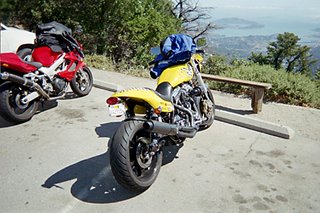 2nd trip over the Golden Gate

This time on the Yellow V. I leave saratoga early saturday morning and it is sunny and warm down here in the valley. I run up 280 north to Chucks house in the city. I sputter to a slow stop after after Bunker Hill on the shoulder of the centeer divide! What! I should have enough gas! Oh. Yeah, the reserve....throw it over hit the starter...boom I'm off again at freeway speeds. I see a few bikes going south... and they look over like i must be lost. As i clear the hill just below serramonte....i see big clouds. Rain? Heavy drizzle and I pull off and into a Shell station to gas up and wipe off....I think about turning back and cancel that idea - too close to the city and it could clear up. Nervous times riding in the wet with cars and trucks around you. I get to Chucks and we sit and talk in front of his stove with the oven on to dry me out. Chilly out there and even more when you are wet. It eventually clears after noon and we head out over the bridge to ride the curvey roads up to and around Mt Tam and Marin.

We come off the mountain heading north on the ridge overlooking Stinson Beach. The swell was up and you could see the sets of waves wrap the point into the bay. We ride on the road used for many car commercials. Pristine blacktop with green grass on either side. The fog is rolling in but some parts of the coast are still clear. The motorcycle is like surfing. You carve your turns, you balance and move your weight around to get this metal beast in and around traffic or obstacles. We descend into redwood forests where the turns are sometimes wet from dripping trees and the light of the sun can barely peek thru the canopy. Finally just above sea level we tank up our tanks to make it back to the city. And jump on Lucas Valley Road back to 101 south. 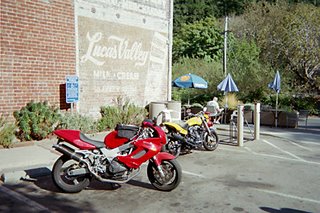 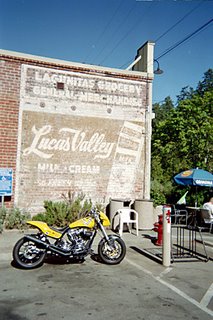 It is summer and the sun takes it's time going down. It is almost dinner time and after Chuck leads us over the bridge and around the persidio we head for the wharf. Chucks friend has a band and they are performing at a bar. We pull up in the midst of a tourist swarm and because the bikes are small enough we park right across the street from the bar and we can hear the band doing covers of classic KFOG rock. I can't even get both gloves off when this guy walks up with his camcorder and his baby and asks if he can take a picture of the baby on the bike! I don't know what he wants really but, i say yes and next thing i know i am holding a one year old on the gas tank as the dad goes into the street and stops traffic to get his shots. The music was great and it was nice to relax and kick back with my friend and a beer and talk about the ride. Leaving was another thing. First we walk down to In & Out burger and wolf down some burgers and fires....this is where i learn about fires well done....very crispy and not soggy. It is dark now and the crowds are still walking the wharf. We unlock the helmets and bikes and get set for a ride thru the city. This old biker walks up and recognizes the custom chrome engine....talks to me about it and tries to talk me into doing a wheelie down the street. Yeah right. When we start up the V Twin comes to life like an M80 going off in a sewer pipe. We idle for a bit just letting it blip along. Now some teenage kid jumps off the sidewalk and taps me on the shoulder and yells over the engine "Yeah!!!!!!!" and gives me the thumbs up.... A show bike is just that. For the show.... i don't like the attention. Makes me nervous. I put my face sheild down and watch the on coming traffic for a break so we can leave. I glance over to the sidewalk diners who scornfully look at the noise that is ruining their dinner in romantic SF. Oh well... Chuck nods that we go.....so we go and Our pipes roar down the street and reverb off the buildings and i can still hear some people on the sidewalk whooping it up. We turn up a street and head out into the dark. 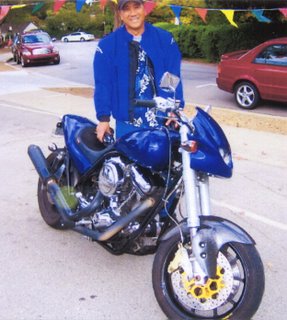 The blue V was one of the original prototypes built in 2003. Now street legal (barely) with all it's lights etc. I was going to bring the yellow V but, someone dropped it and craked the fairing. Ouch.
Posted by jgomez at 6:36 PM

very cool... makes me want to ride again. I've been on Lucas Valley Road on my bike many years ago.

Hey those are pretty good stories. Sounds like a lot of fun.

Say hi to George at Skywalker Ranch; did you hit any stray stormtroopers up there?

Those rides seem like they are from another world - one in which it doesn't rain. We have to go back to Northern Marin/Southern Sonoma county - what with all the mudslides and washouts in the coastal hills, I'm planning on twisty flats for a while.